so I have under consideration the investment in a Max Prop or Kiwi prop. I know the AutoProp will not fit. But I am concerned about longevity and reliability. My three blade fixed may slow me down a bit, but it never stops working. I do not haul the boat each year because the annual transition from fresh to salt water and back again means a scrub each spring is all I need. do the feathering props need annual maintenance and grease? I know some of you have feathering props and I would like to hear reports on reliability and longevity and if the increase in sailing speed is actual as opposed to theoretical. thanks.

Staff member
Hi Terry - I just bought a Max Prop (16” Easy Model, 3 Blade) and Zia is currently hauled at Schooner Creek getting it installed and some fresh bottom paint. It seems like a very impressive device/craftsmanship and I’ve been really happy with the customer service at PYI (US representatives).

Max Prop says it should be topped off on grease each year and the anode should be changed. But both of those are easy & can be done by a diver so I plan to have it done when she gets her annual in-water scrubbing.

At first Schooner Creek told me it wouldn’t fit in the opening because I only have 9-3/4” between the cutlass bearing and the forward edge of the rudder. After some talks with PYI and going to Schooner Creek with a tape measure I think I have them convinced it will fit. The shaft will need to be cut shorter, though, which is going to involve dropping the rudder. It’s possible I might need to cut 1/2” off the tip of the anode, but PYI says that won’t be a problem. I’ll post some photos on here if we are successful.

John (Wild382) has a Max Prop Classic Model, which PYI tells me is longer than the ‘Easy’ model and it fits fine and he is happy with it. Several other people on here (like Alan Shedd) have Max Props also. I hope they chime in on this.

I’ve been told that in light winds and a couple knots of opposing current I can expect a 1-1.5 knot speed increase with a feathering prop. We are looking forward to seeing if that is true. We are not serious racers, but that adds up when doing voyaging too.
Last edited: Mar 4, 2019

I've been running a 4-blade Vari-prop for 15 years. The prop has held up but it was a mistake to go with 4 blades. It's just as loud as a 2 blade.

Staff member
At this point Bert, Chris and I began a discussion on if (or why) drag force is affected by current. If you want to post or read about that, please see this:

If you have some feathering prop experience you can share with us, please post on the thread you are currently reading (here!).
Thanks

Staff member
We just finished the installation of our Max Prop and Zia splashed today. Here is a video I got before she splashed and before the rudder was re-installed.

Good day Mark,
This coming spring if, all goes well, I’ll be installing a Beta 43hp in my M-382 Cha-Wa-Kee.
I’m seriously considering swapping my Sailorman fixed two bladed 18x14 prop for a feathering three bladed.
With the confines of the apature space in mind I’ve looked at these feathering props...
Ewol SS, Variprop, Autostream SS from Oz, Featherstream by Darglow, UK, & Max by PYI. Having spoken with the reps of each of these suppliers, some more helpful than others, some with somewhat different opinions on clearance requirements etc, Oh, the magic art of prop selection....
Please, forgive my long windedness, I’d be most grateful, of course, at your convenience if you could/would provide me/the group with a few details.
Re: your Max prop, it’s blade dimensions/pitch and the various clearances of the prop tip, skeg and rudder; with the prop feathered and in drive.
Any additional pics of your prop installation would be terrific too.
With thanks,
Cheers, Rob.

Staff member
Hi Rob!
In doing research, I hope you’ve seen this article on Folding & Feathering props from Yachting Monthly Magazine? There is also some pretty good video. After doing the research like you’re doing I settled on a Flexofold, but realized I didn’t have the space to fit it in the aperature due to my limited distance (9-3/4”) between the rudder and the cutlass bearing.

I ended up settling on a Max Prop ‘Easy’ model, 16” diameter. They recommended a 14” pitch with our new Yanmar 4JH45 (45 HP) and our 2.36:1 Transmission. This model is about 8-1/2” from the front to the back of the anode. I was told that I needed at least 1/2” space between the front of the prop and the cutlass bearing for water flow.

I was very impressed with Fred at PYI (US distributor of Max Prop). He was very knowledgable and helpful. Patient with answering questions.

We hauled out a few weeks ago and had our bottom sanded/painted and the Max Prop installed. We knew that our shaft would have to be shortened. We also had a little nub (don’t know what it’s called) that sticks out of the skeg where the cutlass bearing is. The mechanic @ the boat yard claimed that we should cut off the nub and move the cutlass forward in order to have enough space. Fred @ PYI said he thought it would fit without doing that because we only needed about 1/2” between the anode on the prop and the rudder. 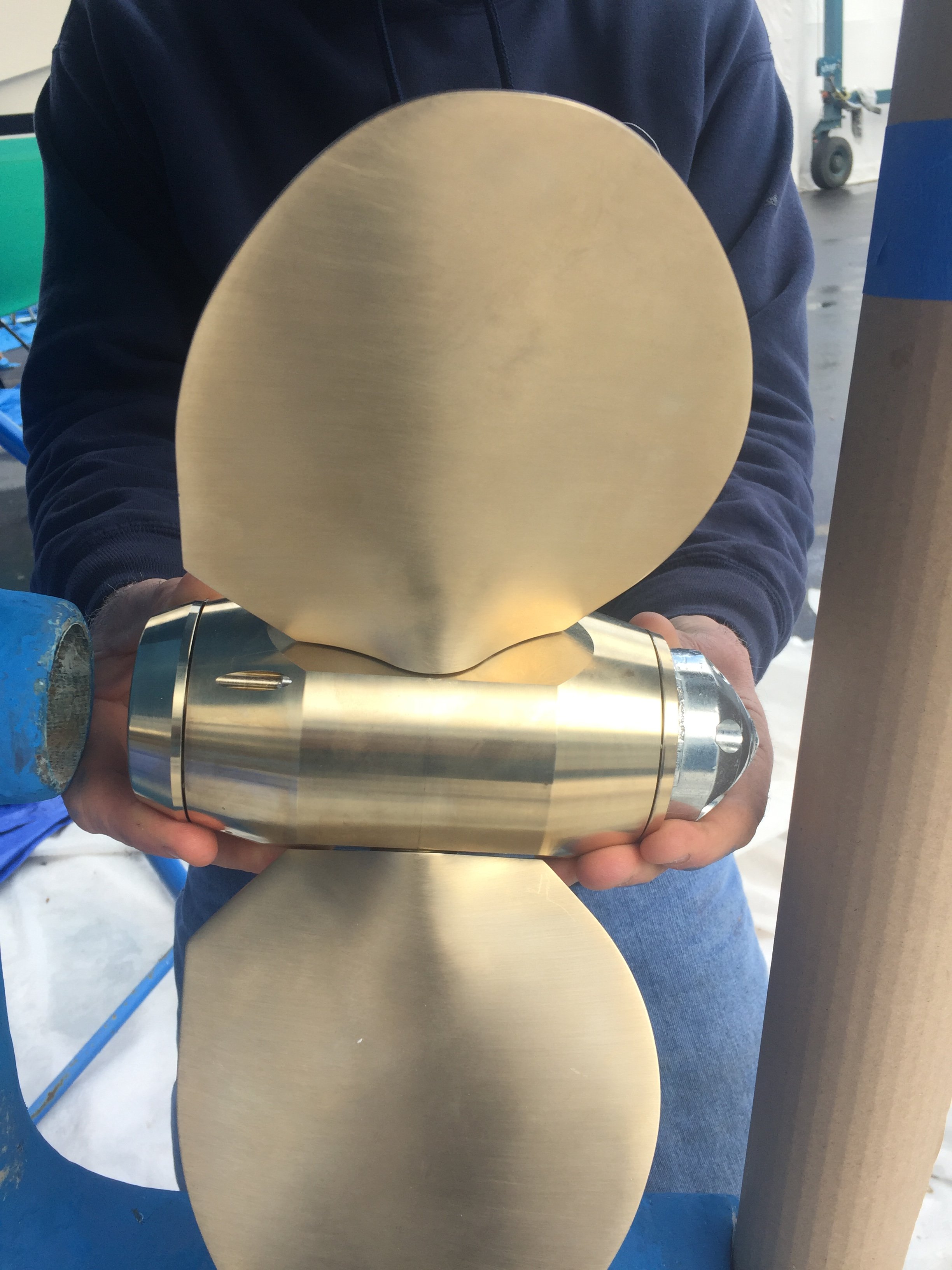 I also thought it should fit but ultimately decided to have the mechanic move the cutlass forward. Because it only cost a few hundred $ and would make servicing the anode and prop easier, especially since we will be diving to do that.

I think the “post install” photo below sort of proves there was room. 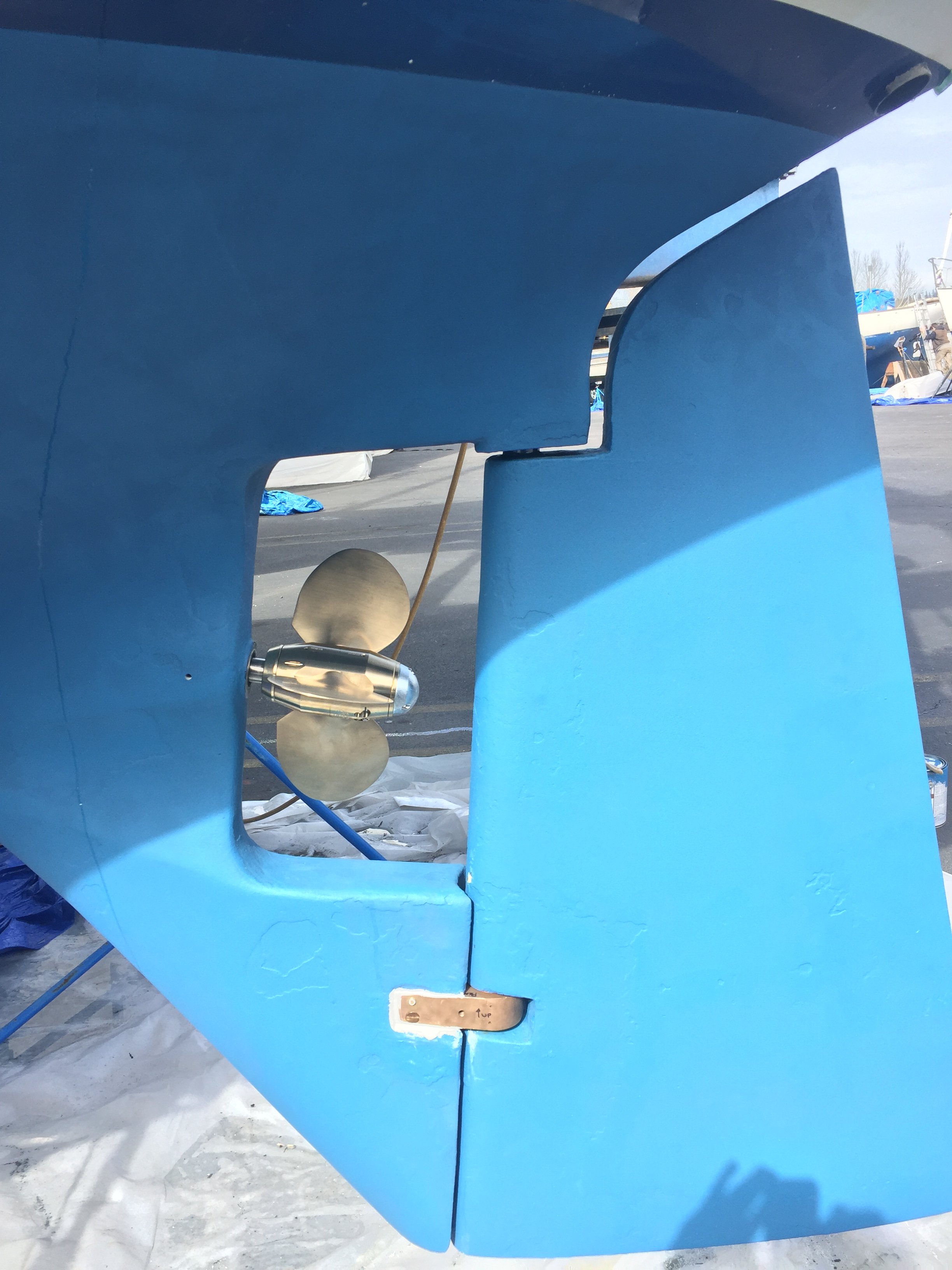 Very happy with the performance while motoring - I get about 7.1 knots thru the water with the Yanmar at 2250 RPM, consuming 0.95 gallons per hour. With our old engine/transmission/prop combination, the prop would start cavitating when it would get up near 7 knots. If we up the RPM to 3000 it shows 7.9 knots, which is above our calculated hull speed and it consumes about twice as much fuel/hr.

There is far, far less prop walk to port than I had with my old propeller. I got used to it, but it was still really difficult to back to starboard in a short distance. Needed to get some speed up to overcome the prop walk. Now there is not much difference between forward and reverse.

Haven’t tried sailing yet, maybe this weekend. The ultimate test will be when we race this summer.

One final point: we have a 384, which have larger rudders than 382s. I don’t know if the opening where the prop is (aka aperature or aperture) is exactly the same. My guess is they might be.

Mark,
Thanks so much for the info & pics, very helpful.
One question.
With the “nub” removed. How did you secure the cutlass bearing from spinning in the stern tube?
Cheers,
Rob.

Staff member
I’m pretty sure the cutlass is kept from spinning by a screw/bolt that is on the starboard side. You can see it in this photo. 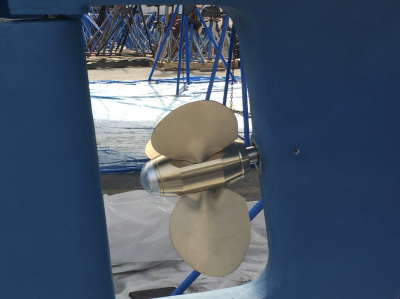 Mark,
Rather than being so inpatient and using my old small screen iPhone 5 in the car...
I should have waited to view the pic on my iPad at home...as I just did.
Again, thank you Mark,
Rob.

If anyone else has feathering or folding propeller experiences, please post them here!

The boat yards have been spraying the props with rattle can Petit Zinc coating. Iv'e used it myself and consider it a good practice.
T

beautiful piece of equipment. I am interested in the bolt holding the cutlass bearing. I dont have one where Mark shows his. Mine is in the bump out Mark removed. Does anyone else have what Mark's photos show?
ROB: Let us know how the repower with the Beta 43 goes. That is what I am looking at--if the long lived, much loved, but repeatedly maligned Perkins ever dies. It seems to run perfectly after 40 years and thousands of hours, but it would be nice to have less noise and vibration.

Terry
Dana is hull #53, 1978. The first time I changed the cutlass bearing I dug in the fiberglass around the shaft log to find the set screws that multiple people said hold the bearing in place. Not finding any I simply put a large channel lock plier on the 3/8" of the bearing that extended out from the imbedded tube. The bearing very slowly wiggled free. What I found was that there were no set screws or mechanical means holding the bearing. What was done, probably from the factory, was that the outer race of the bearing was knurled to raise the outer diameter just slightly. A Boat Life type caulking was applied to the knurling and the bearing slid into place. It held rather nicely. In the 32 years we've owned the boat the bearing has been replace three times. Each time I have the new bearing, 1 1/4" x 2" x 5", knurled at the prop shop for a nominal fee. The trick is to keep that 3/8" of the bearing sticking out from the shaft log so it can be grabbed with the Channellocks.

my boat did not have a set screw and eventually the cutlass began turning in the shaft log, which I had to have rebuilt. Difficult and expensive. I am not sure what part of the bearing you have knurled. The whole outside bronze shaft? One good trick. My boatyard puts the bearing in the deep freeze overnight before putting it in the boat.

Terry
Knurling is a cross hatched machining that is done to the whole outside of the bronze surface of the bearing. By creating the cross hatch pattern, the surface of the bronze is raise a couple of thousands of an inch. That makes the outside diameter of the bearing fit very tightly in the shaft log. The caulking is there just to help lock it in place. Our bearings have been held this way for 41 years now and have never moved. One year we caught a lobster pot line around the shaft which drove the bearing that extra 3/8" into the shaft log. This left me without the means to twist the bearing out. This meant that the shaft had to come out and the rudder dropped. Fortunately, that project coincided with a rebuilding of the bronze rudder bushing. The cutlass bearing was removed with a makeshift puller made out of 1/2" threaded rod and a number of 1/2" x 2" fender washers.

Staff member
Well, I'm happy to report that we've completed our spring racing series (4 races) and Zia won 1st place in the "fun" category of 5 boats. Our category didn't factor in the PHRF ratings of the boats but some of the others were rated quite a bit faster than our 384. This is almost entirely because of our new Max Prop feathering prop. Last year we were not only last place, but we were a good 20 minutes behind the next boat. I'm a serious believer in feathering/folding props now. We would have beat some serious racers in the other categories and we are not serious racers.

We don't really like racing around the buoys that much and dodging other boats. But next weekend we are starting to take Zia offshore (up north) and the prop will make a significant difference in our cruising travel times too.
You must log in or register to reply here.
Top