I have a 1980 382 with the traveler in the cockpit just forward of the pedestal. Has anyone with this configuration moved their traveler to the deck over the cabin or have knowledge of? If so, what were the results? What are the considerations that should be weighed when considering relocating the traveler? Pros and cons? Thanks.

I like my traveller in the cockpit and don't intend to change it. Relatively convenient to the helm if you are behind the wheel, low effort, no winch required. But there has been lots of discussion on this site over that issue, with opinions on both sides.
Stee
T

You need to know if the original boom, designed for end boom sheeting has the mid-boom strength for a sheet over the cabin top. I have never compared the booms. I prefer the cockpit location. It is best for sail control, even if it obstructs some cockpit leisure activities.

I am of the dissenting opinion that the traveler in the cockpit is a major safety hazard, and not really any more convenient for single handers (which I am). In fact, as a single hander I need to reach over the traveler during maneuvers, making it even more dangerous. There is no reason a cabin top traveler can't have enough purchase to not need a winch, and no reason it can't be led aft to the helm. I have even seen double ended main sheets, that could be led down both sides to be available right near the winches.

I have been hit by the traveler. It sucks and I am lucky I was not seriously injured. IMHO any perceived convenience isn't worth that hazard. If I were racing with a full crew, the cockpit is the preferable location in terms of control.

My "perfect" setup would be the taller 383 mast, with the cabin top traveler. But, I would use a boom the same length as the 382, and move it higher to use the same mainsail as a 382. That would both move the traveler out of the cockpit and also give me standing room in the cockpit.

But it's a moot point. I have what I have, and it's too big a project right now to change it.

Warren
I totally understand your objections to the cockpit traveller for the use you have for your boat. There is a big difference between single handing offshore and coastal cruising. Even for any kind of serious racing the cockpit traveller is a disadvantage. But for the kind of long range coastal work that we do it the perfect arrangement. My biggest complaint is that we can't sail and have the dodger/bimini connector in place.

FredJ said:
I have a 1980 382 with the traveler in the cockpit just forward of the pedestal. Has anyone with this configuration moved their traveler to the deck over the cabin or have knowledge of? If so, what were the results? What are the considerations that should be weighed when considering relocating the traveler? Pros and cons? Thanks.
Click to expand...

Fred - The original boom section was designed for end-boom sheeting. Moving the traveler to the cabintop will significantly increase the loads on the boom. My boat was converted to mid-boom sheeting by the dealer when the boat was new - they simply moved the traveler using the original boom. Before I left to go cruising, I had a rigger evaluate my rig. He ran the numbers in his engineering program, and I ended up replacing the boom. It's MUCH larger than the original. Unfortunately, I'm COVID stuck in Chicago and my boat is in Portugal, so I cannot give you any specs right now.

My rigger had lots of used spars lying around. If memory serves, the boom we used to replace mine originally came off of a 50' boat (I cannot remember the make). They simply cut 4-6' off of the end of the boom. It's a little oversized compared to the what the calculations called for, but not grossly so.

As for cons... not many (assuming you address the boom size). Though, when I'm daysailing, I'd prefer to have the mainsheet close to hand. My compromise is to take a turn around the mainsheet winch (on top of the cabintop, near the companionway) and lead it to either of my spare jib winches. It works well enough.

The other downside is preventer placement. An ideal preventer leads from the end of the boom, forward to a turning block near the bow (I use a low-friction ring) and back to a winch. That provides a good angle for the preventer and allows a soft jibe. When the mainsheet is attached to the end of the boom, the mainsheet and preventer forces are directly opposed. When the mainsheet is attached mid-boom and the preventer to the end, you've now created a lever between the two. And, if you're not careful, you could easily break the boom when winching on either. You can read about about this exact scenario here - though the mainsheet and preventer placement were reversed in this story, it's the same concept.
Last edited: Oct 20, 2020

Staff member
Hi Jim - that connector canvas you mentioned that connects the dodger to the bimini: we have jokingly named it the Taint. Because it 'taint a Dodger and it 'taint a Bimini.

And yes, we are aware that there is a part of the human anatomy called a taint as well. Ok, that is "off topic".

This is somewhat off topic too, lol.
Warren, could you relate some of the lessons you have learned regarding single-handing your Morgan? I am very interested in what you have found in all your miles. I am pretty sure if I get a chance "to leave" it will be single-handed. Perhaps in another thread would be appropriate?
Thanks,
Mitchell

I moved the traveler to the coach roof in the previous century. After several attempts with reinforcing the original Kenyon, then to a boom from a Benateau and finally a Carbon boom from Aspire Spars in Illinois. The main sheet is 4:1 double ended through stoppers as seen on Many Catalinas with the original Jib sheet Lewmar 43's on the coach roof. All ball bearing blocks with supple hi-tech cordage long enough to go to the cockpit secondaries.
Because there is less line in the system gross sheeting is almost dingy like and the 43's or the secondaries do the work on fine trim.
Single handed or with crew.
F

Thanks folks, for all your input. It's been very helpful and educational. I suppose it's best to leave the traveler in the cockpit rather than replace the boom.

One would reason that a mid boom mainsheet would require a heavier boom section than end boom sheeting.
But its the same part number from the drawings. Which may or not be significant. I thought my 383 boom was the same section as 382's I looked at... but that's totally anecdotal, and a subjective opinion from long ago.
We know the 382 boom is longer but could it be from the same extrusion?
In which case, contact Guido at Garhauer for advice. my Garhauer traveler was the bomb. The Nico original equipment traveler was junk.
Dave 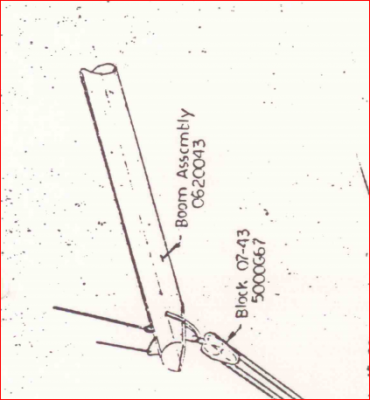 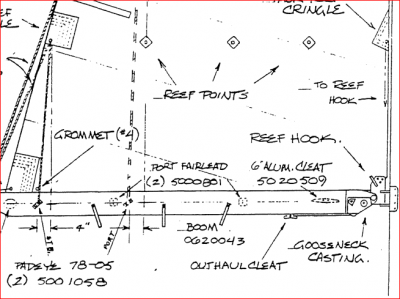