as I have posted on the pub side, you guys know that Vixen will probably be going in the Marion/Bermuda race this year. I know from years past when I did the race I had polar diagrams. I’m not sure I can find them does anybody else have information on the polar diagrams for the Morgan 382?

Warren - Do you a lead on where to find polars?
T

Doesn't US Sailing have these? I joined several years ago to get stability info on the 382, but I am no longer a member. The 382 had a stawbikity index of about 125%.

I purchased polars from ORA several years ago.
Polar Package (offshoreracingrule.org)
Frankly, after using them preparing for and racing in the Pacific Cup, then cruising thereafter, they are not terribly useful. True, You need _something_ in order to run the routing in various routing programs, but given that the weather isn't going to be exactly what is predicted, that the polars are for _perfect_ sailing on a _perfect_ boat, all of the errors seem to cancel out. The algorithm predictwind uses with just a few wind angles at 15kts does a better job than I was able to achieve with these polar in the real world. That at least is based on my boat in imperfect sea state instead of a computer model.

On SF bay, when the water is completely flat, with a consistent and steady wind, the ORA polars are pretty close-but it's super rare to have 12-15 kts of wind and no chop. In the ocean with a 2-3 meter swell, forget it - they are just wrong. The more sophisticated routing(racing) software also adds a polar for waves/swell. That polar needs to be hand created, I don't think those are available anywhere.

I have struggle to create a real working polar. OpenCPN has a data recorder that will record instrument data and create one, but it still requires a lot of manual tweaking, as SOG from the GPS isn't very stable and so there are a lot of erroneous data. My STW instrument has never been even close to accurate, and at least with raymarine, I don't think accuracy from that instrument is even possible. The sensor is non-linear, and differs from port and starboard. So to be close to accurate you need multiple calibration points (speed) to capture the non-linear aspect. Raymarine only uses a single calibration speed. To truly be accurate, you would need to have multiple calibrations on each tack. I digress.

I haven't been cruising for a while and would need to dig up my laptop to get to what I have been using and I could share it. But the reality is that weather routing is great for planning and knowing how long a voyage will take and what _general_ route to take. But once on the water, with conditions and boat performance not matching the model, I sail my own way. Sometimes it differs by the predicted route by a lot. And mostly I would just use the predictwind model instead of polars.

If I was in an active offshore race circuit, with lots of races, and lots of opportunity to tweak the polars, then I would probably do so. It would realistically take many weeks or months. Waiting for a day with consistent 10 kt winds, then making a number of runs at various sailing angles, then averaging the results. Then wait for a day with 12 kt winds. But anything short of a very competitive environment, it just isn't worth it. It's not even worth the $300.

I don't want to share the complete polar package, which include polar diagrams, data sets to import into routing software, and many pages of charts, as it is copyrighted material. But, I will share the "sailing targets" page. 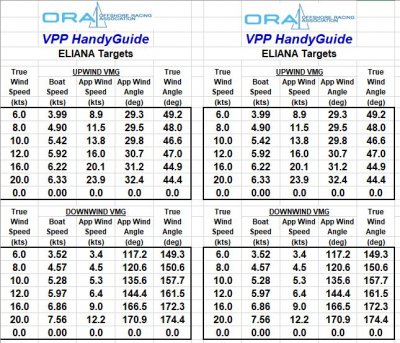