About a week ago I started getting a nasty head smell for the first time since I've owned the boat. I've spent the past couple days trying to track it. It seems to be strongest in the quarter berth. The smell starts about 5 minutes after using the head and dissipates after about 20 minutes.

I have checked, and there is no smell in the head under the cabinet. No smell under the galley cabinet. None in the bilge, nor near my macerater. The smell is worst (and sometimes quite bad) in the quarter berth.

The vent runs over the quarter berth, and I have removed the liner to inspect it. It's grey solid plastic (same as all the pluming) with no connections in that area. It looks to be sound, but certainly seems to be the source of the smell.

Anyone else had this sort of vent hose failure?

Have you recently been in any freezing conditions? There may be a crack in the vent hose. Or maybe it has just given way to old age?
I know that when I replaced that hose on Dana, the hose was simple garden hose and there were droops in the hose where liquids were setteling. Hope this helps.

I've never had the problem, but perhaps one of the Flexseal products could be a quick fix.
https://www.flexsealproducts.com/

Warren
Another thought: could the vent fitting on the stern be clogged to the point where it is causing the fumes to find another means of escape?

jimcleary said:
Warren
Another thought: could the vent fitting on the stern be clogged to the point where it is causing the fumes to find another means of escape?

I will be investigating that next. I suppose an easy check would be to crack the waste tank deck fill. The vent is fairly new, about 2 years (I guess not that new anymore) but the cheap WM vent is already solid black instead of shiny. So perhaps a low quality and corroded quickly. I just *really* struggle with reaching the damn thing. It's one of the hardest things I had to do on my boat, believe it or not. I've injured myself both times. It might be worth relocating to a serviceable location so it could be cleaned once in a while.

I moved the holding tank to the v-Bunk. The run of 1/2" hose from the v-Bunk to the stern was too long and too small. This winter I added a 1" vent line that exits the boat about 10' from the tank on the stbd side under the cap rail just forward of the lower shroud. We'll see if that helps the situation. I've a feeling that most holding tank problems begin with the vent lines. Good Luck.

No issues with water getting in? I was thinking near/over the scuppers that are outside and just forward the cockpit. A bonus for the diesel vent, is that spillage would be contained and not go overboard. I've been yelled at by fuel dock attendants for that.

I removed the deck fill, and heard pressure escape, so the vent is/was clogged. Visually the vent is solid black and not shiny. I can't really reach the back of the boat to inspect it better than that. I removed the hose, and pumped blue stuff into the tank through the hose-it is clear. I left it disconnected in the locker. Any reason the vents can't just be inside the locker and not to outside? But in easy reach for cleaning? That's the real issue, vents need attention, and they shouldn't be in a hard to reach place.

Anyway, the smell is much better, but I can still faintly smell a mix of head smell, and the blue stuff in the quarter berth. At least it isn't noxious. It will have to do until I can replace the whole vent system.

I agree on the size of the vent lines. They are (at least on my boat) not even 1/2". They are 3/8" ID. They are called 1/2" because the OD is the same diameter as 1/2" copper pipe, and so it works with fittings for that size pipe. I carry a handful of spare fittings for emergency repairs.

I hate where those vents are located. They must have installed them before the deck was put on the hull. Also, the water vents and fuel vents should not be back there where they are susceptible to salt water intrusion. My water vent lines are now just inside the boat along the hull and my fuel vents are inside the cockpit. Welcome home (sort of) Warren. Wish circumstances were better for your return.

Warren
The new vent for the tank is on the outside of the hull just under the cap rail. I'm not concerned with water intrusion as whatever gets in when the boat is really heeled over just goes into the tank. The water tank vents and the fuel tank vent are still on the stern.

Question: did the bad smell in the quarterberth only appear just after you used and pumped the head?

Crazy story: I had sailed on a friends Pacific Seacraft 31 for a weekend cruise. The boat at the time was 35 years old. At anchor I was sleeping up in the V-Berth when my buddy got up to use the head in the wee hours of the night. When he finished and pumped the smell in the V-Bunk drove me up on deck. It was horrible. Later in the morning we investigated and found that the 90 degree fitting for the vent hose on the top of the V-Bunk mounted holding tank was jammed up solid and had been that way for a long time. The pressure of pumping into a tank with no vent caused a 6" long crack to develop in the plastic of the tank. It was like that for quite some time, I just happened to be the first victim to be exposed to the rather malodorous results. We cleared the vent, epoxyed up the crack until he installed a new tank the following spring.

I'm thinking if your stern vent fitting is clogged, there may be a crack or a loose fitting in the vent hose that is releasing the pressure into the boat.

Warren,
This seems to have a few symptoms in common with an issue we just solved. I agree with the others, from what you describe, it would seem like the vent is clogged.

The smell was coming from a minor leak where the pump out hose meets the deck fitting. With a clogged vent, flushing the toilet slightly pressurizes the tank, pushing stinky air through that leak into the area behind the electrical panel.

Travis - you can actually see the bubbles leaking around "cap" that Morgan (poorly) glassed in the bilge.(if you have water in the bilge of course)

Ugh. I thought had dealt with it, at least temporarily, but it is getting worse.
The deck fitting was one of the first places I checked. I never smell anything behind the electrical panel, but it's hard to judge, as I smell a lot sitting at the chart table. I did wrap the end in buytl, and opened the cap to relieve pressure. There is pressure in that hose, which is not due to the vent. The other end is under water, so as the water level rises, that hose will pressurize. To some extend, that it relieves pressure when I open it would mean that it is holding pressure, and not leaking (badly)

Which comes back to the vent line, as the worst smell is above the headliner in the quarter berth. The vent hose is not rubber. It's hard plastic. I have flushed it with water, and is is clear, not clogged. I can't find any cracks or damage, and it is a really tough line. I would be surprised to

What is the size of the hose to the holding tank deck fitting? It looks larger than the "standard" sanitation hoses in the head. It seems easy enough to access and doesn't look too difficult to replace. I _might_ attempt it even though I would normally not consider such a repair while at anchor with limited supplies. The chandler here does have a supply of hose.

It can't be anything other than that hose or the vent hose leaking, so it's time to replace them both.

Warren,
My hose is older and doesn’t have a size noted on the label, but the caliper reads 2.373” outer diameter. 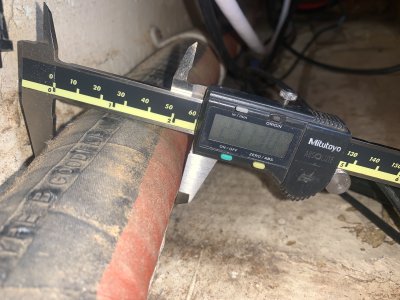 Good luck with the change on-anchor. This is probably my least favorite thing on my to do list. I’ve been kicking the can on all three deck fill hoses until I have a spare set of hands and the rare inclination to spend the day wrestling snakes into submission...

Just last week I replaced all the hoses to and from the holding tank. Four years ago we moved the holding tank to the V-Bunk and I made the mistake of using a cheap and inferior 1 1/2" sanitation hose. It took a year for the hose to start emitting a very stale smell. Thirty five feet of $9 per foot hose and a couple of nasty days of wrestling alligators later, the job is done. We'll see this summer if that was the problem. We have all our collective fingers and toes crossed.

jimcleary said:
Just last week I replaced all the hoses to and from the holding tank. Four years ago we moved the holding tank to the V-Bunk and I made the mistake of using a cheap and inferior 1 1/2" sanitation hose. It took a year for the hose to start emitting a very stale smell. Thirty five feet of $9 per foot hose and a couple of nasty days of wrestling alligators later, the job is done. We'll see this summer if that was the problem. We have all our collective fingers and toes crossed.

Was the deck fitting also 1-1/2"? Does it just look larger do to the heaver quality hose?

Warren
On my new holding tank system in the V-Bunk I installed a new deck fitting up forward. It accepts the 1 1/2" hose. The hose I brought is Dometic odor safe plus sanitation hose. 1 1/2" is the largest it comes. I'm looking at the Defender catalog at the moment and there isn't a sanitation hose offered that is larger then 1 1/2".

Thanks. The chandler here only has about 6' in stock, and since I won't be here very long, and since I don't use the tank while making a passage. I'm going to wait.
You must log in or register to reply here.
Top