Since I have everything removed of the deck as it has been painted, I can very easily see the problem (see pictures below).

The water is entering in the corner of the teak trimming the top of the companionway, and seeped from the same corner down into the boat, on the floor. Over time, the floor has rotted (I bought the boat like that and plan to fix it).

I already tried replacing the sealant at the corner and along, without removing the teak though. It held for some time but with the recent downpour we got in Virginia, it failed.

It is a design problem in my opinion, as the teak trim is being screwed from the side, and not the top. Therefore the sealant is not being compressed and it doesn't really do its job. Furthermore, at the corners, there is again no compression of the sealant between the three pieces of teak.

Did anyone remove that teak trim and fixed it in a way that water is not seeping in anymore? Once my companionway hatch and sea hood are back on, the access is lost, so I want to fix it now, and fix it good. I just need some ideas.

Just re-bedding, in my opinion is simply not sufficient. It will held for a few years and will do the same again. 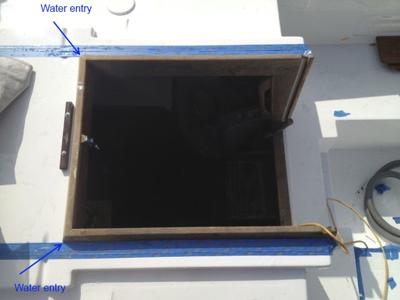 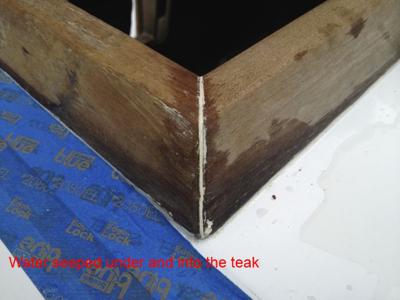 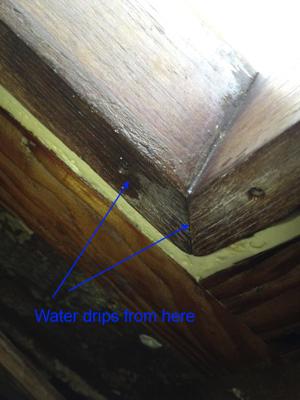 Thanks in advance for your ideas.

If it were me I would remove all the teak from the companion way hatch dry it out. Sand it down Varnish both sides like 6 coats. Than re attach 4200 and screws. Plug the holes with teak bungs and it should be fine. Don't spare the 4200 ! and re varnish one last time..
I know its work but its the long hard way but you will know its done right .
You can get a boat wright to do it but its basic wood working and costly if he does it . You can ask one how to fix , for better advice.
I use 4200 and west epoxy X10 the newer stuff in the 20 dollar tube really works wonders. But its permanent .
A tip to remove 5200 use Marine Formula , made in florida and it really works. Google it !

Philippe
In your photos, have you removed the hatch and the cover? Any problems doing that? I have a leak similar to yours put it only shows up when the boat in on the hard and the bow is raised higher than when in the water. I'd like to get at the source but feel the cover must come off to do that.

Yes, I removed the piece of teak that hold the companionway hatch in place, and the sea hood.

There wasn't any problem. All of those were simply screwed in with lots of dead silicon based sealant.

As my sliding hatch had created a groove into the fiberglass over time (which is now filled and painted over), I am planning to apply UHMW tape for it to slide easily and not to groove the fiberglass. I am also remounting everything with thru-bolting (properly core out and filled with epoxy to protect the core), no screwing anywhere, and butyl tape sealant. I saw too many signs of leakage from screws that went through the deck for remounting it the same way,

We all should do this. But I don't have right now. What is UHMW tape? I have the same problem with the grooving from the hatch.

You can also use a piece of thin aluminum or piece of plastic and slip it under the hatch. Leaking sometimes is a result of balance of the boat, bow down does not allow water to drain aft to the cockpit.
Jim
P

The one I bought was actually in an online marine store, but I can't find the link right now. I bought it to be 2" wide and 1/16 thick so that it really provide a protection for the deck.

I agree with Jim that leaking is a matter of balance of the boat. Because my boat is on the hard, bow up, all the water run onto the teak. However, morgan design of the companion teak is not very good. The bolting/screwing should be down toward the deck, not side way as it is. It's bad design, and with most sealant having such a short life in a marine environment, it leaks.

I'd like to improve the design and find a way to bolt down. Right now, one of my crazy idea would be to cut each piece of teak so that the top teak bolt into the bottom teak. That way, I can compress the sealant properly. I haven't done it, I am just wondering about it.
R

Philippe--
How did you seal the leak and get the drainage squared away?

When my 384 went on jack stands this Fall it was trimmed down slightly by the bow and exactly the same leak has appeared.

Do you mean how I sealed it temporarily or completely?

If it happens to you only when trimmed slightly by the bow when on stands, then you simply need a way to divert the water before it get underneath the companionway teak. Blue tape and zip locks works great.

What I did ultimately is that I removed the companionway teak. This in itself was a mega pain because someone had tried to remove it before, and failed. Most heads of the screws were broken. Then, it was affixed by Morgan with a very strong adhesive sealant (5200?) and took patience to remove. I wouldn't recommend it except if your leak is so major it's destroying your floor (like mine).

Once removed I figured the following problems:
- There is a gap of 1/4 inch between the vertical flat part of the companion way teak and the vertical flat part of the companionway fiberglass. Therefore, the only contact where the sealant was doing its job is the 1/2 inch horizontal section.
- At the corners however, there was nearly no sealants along the fiberglass, and the sealant between the teak at the corners was also almost nonexistent, and anyway, sealant doesn't attach much to teak over a long time
- Furthermore, because of the gap mentioned above, anytime someone went down the companionway and used the companionway teak to hold on (I do, every time), there was a tendency for the teak to bend inward since only a little sealant was in the gap. I could see that bending at work. That bending stressed the corners even more, opening them, and thus increasing the leak (or so I think)

To fix it, we thought of several way, but ended up:
- Cleaning and sanding everything to be like new and making sure no old sealant remained
- Taped the companionway with blue tape, covered it in putty thickened epoxy, and placed back the companionway teak in place. Basically, we made the companionway teak one unit instead of 3 pieces, epoxied the corners, and filled in the 1/4 gap that existed when in place
- After removing it again, cleaning the epoxy and sanding it nice, we covered the entire companionway in penetrating epoxy, for look and for protection (I do regret that step however after a fact as I am not sure it was necessary)
- With the companionway teak in place, I drilled 6 new holes to affix it to the companionway. The holes are angled about 30 degrees, and come out into the wood frame inside the boat. I counterbored on the inside as well. That way, instead of screwing it, we can bolt it now.
- We also fixed some places in the teak that had broken, for ex, the small "tongue" of teak toward the aft, by reinforcing them with new teak.
- Then we plan to use use butyl tape, and bolt it back in place. We haven't done so yet because life events have changed our schedule and we can't spend time at the boat this year anymore, but everything dry fit great, so I don't expect any problem.

Philippe--
Thank you for the advice. The pictures are very helpful.

This has been a stealthy leak. Until now I have not been able to figure out why my cabin sole is discolored and delaminating in that spot on the starboard side -- mystery solved thanks to your post.

Once the leak is fixed I want to figure out how to repair the sole veneer rather than replace the plywood. Any ideas?

My boat is in Sandusky, Ohio so the repairs will have to wait for Spring. It's covered so there should not be more damage. Once I get the companionway sea cover off, I will look for the problem areas you found and see what repair needs to be done.

I have been following your project for a couple of years and appreciate the photos. They are very helpful as all Morgan 38's seem to experience similar issues.

Thanks for the kind words Roger.

In our boat, after X years of leaking there is a 1 foot square dead mush at the bottom of the companionway.

Our plan is to remove the teak & holly in the entire kitchen area (it isn't so hot looking anyway due to water damage in that area), replace the plywood that is rotten with marine plywood soaked in epoxy, and put on a mock teak & holly over it.

Our reasoning is that since this area see lots of liquid, whether it's from splattering from rain and sea when the companionway is open, or my wife spilling her cooking , a mock teak & holly will be more resistant, provide a better grip to our walking, and be easy to clean.

It's however at the bottom of the thousands tasks on the boat and won't be done for many years.

Sorry to resurrect an old thread. I also have this same leak and am trying to remove the companionway teak. The screws came out ok but I'm struggling to release the teak from the adhesive. Does anyone have any tips? Are there any hidden screws? I just found 3 each side under teak plugs.

When I get the teak off my plan is to build up a fiberglass lip to replace the overhanging part of the teak.

Ok, I found a great technique to remove the teak. I strung a guitar string between two thimbles and pulled it behind the board slicing through the bedding compound. The B string worked best! Wear eye protection as I did manage to break a couple strings in the process. Overall this worked really well and the teak was removed within 10 minutes without any damage to the teak or the boat. 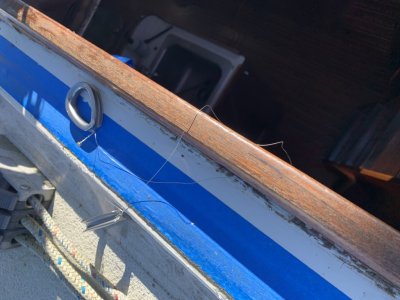