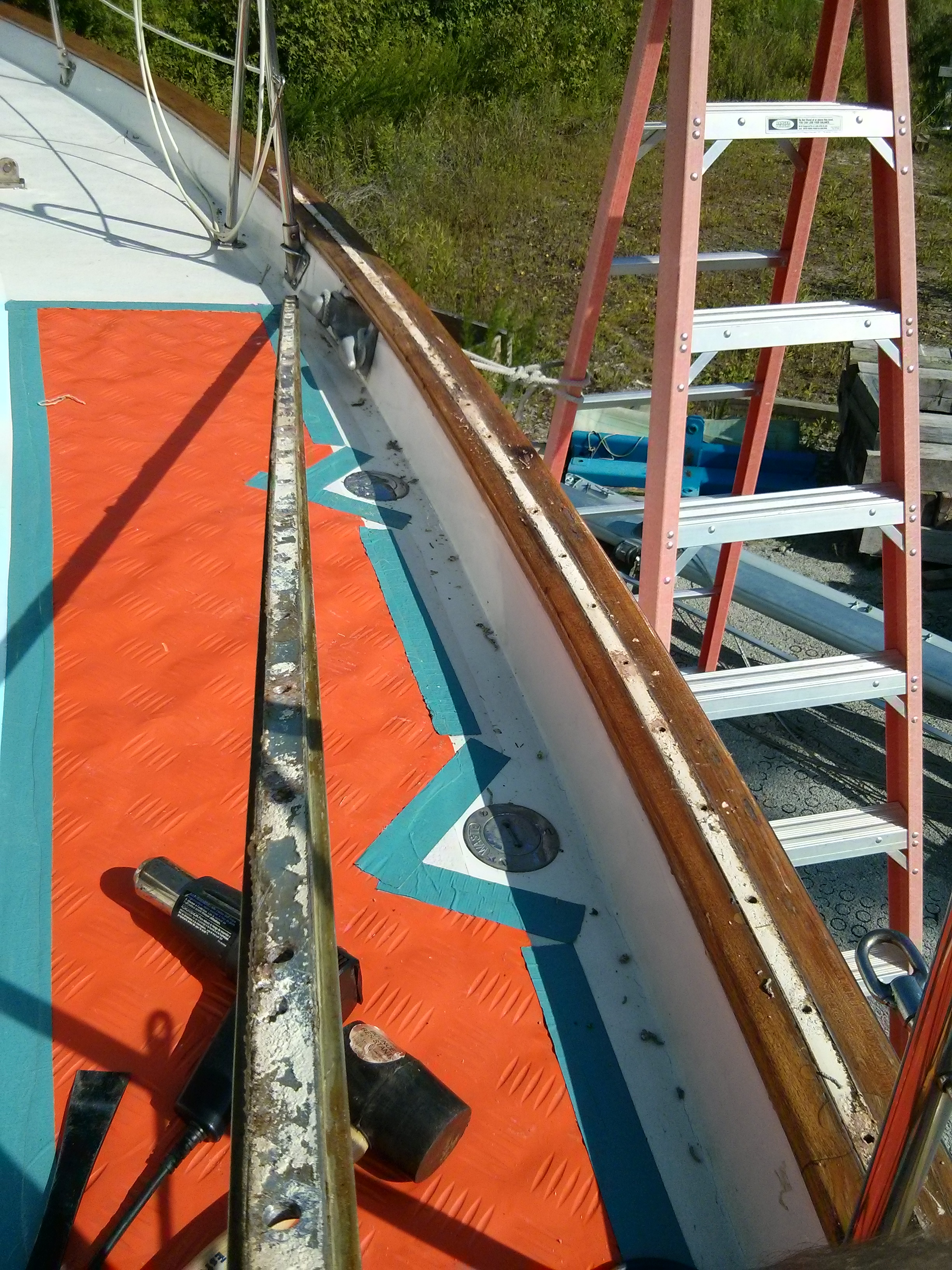 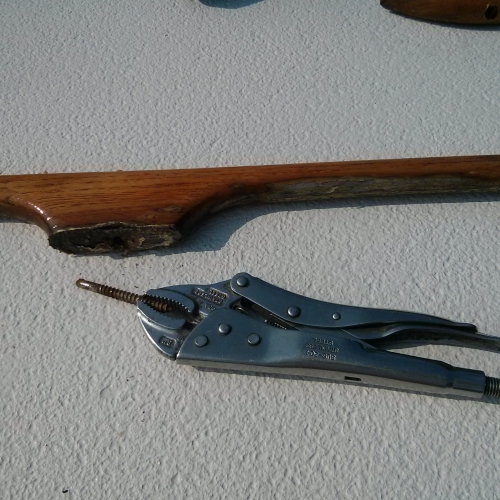 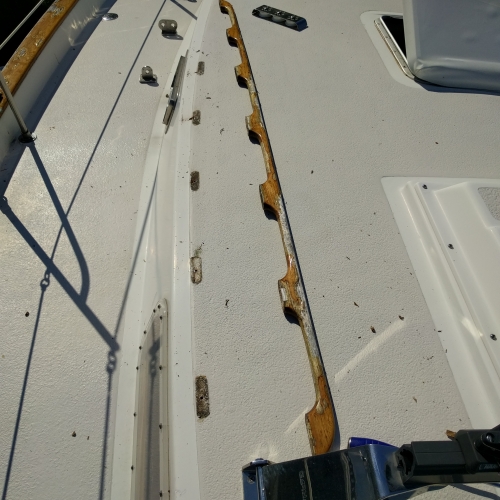 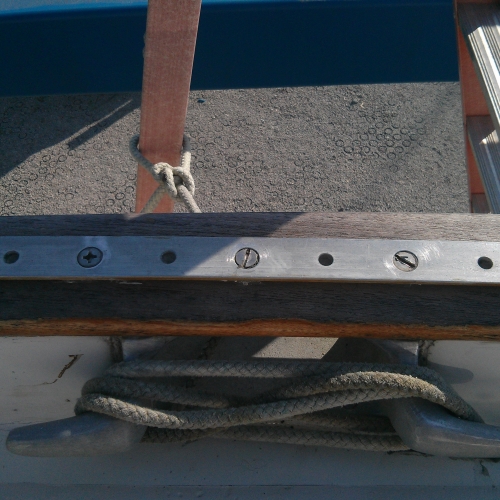 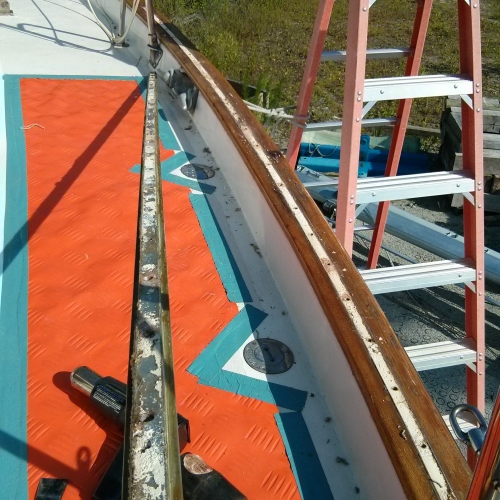 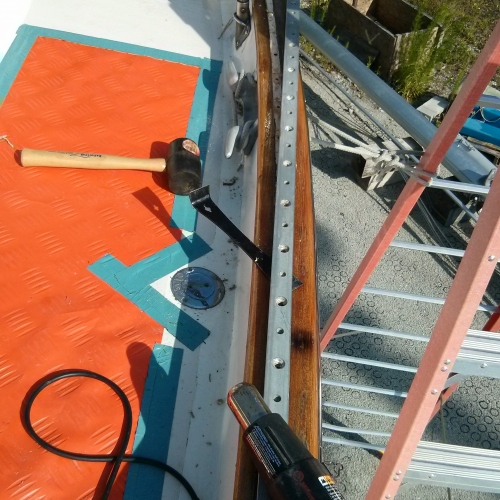 Whew. That was more work than we anticipated. Hope this cures the leaks.
Click to expand...
Doing this same project now. Fun .
Two questions:
- Did you find a lot of "bent" bolts (especially toward the stern)? I have quite a few.
- The bolts above the amidships cleat seam seized. What was your experience with those bolts (and are they threaded into the cleat?)

Thanks for any additional insight you have for this project!

We discovered a few slightly bent fasteners in the area between the mid-ship cleat and the deck scupper. Nothing too dramatic.

On Pilgrim the fasteners atop the cast aluminum cleat are threaded into the aluminum. Fortunately we were able to remove these without damaging the threads in the cleat. I believe that a total of three of the machine screws were threaded into the cleat. Have you used an impact driver to attempt removing the screws atop the cleat? If the fasteners do not succumb to the impact driver, then drilling them out may be the only option. Typically I recommend using a torch to heat seized fasteners, but that is not an option in this area.

We purchased all new 5/16" phillips drive, flat head, counter sunk stainless steel machine screws to replace the original hardware. We were unable to get the new fasteners to thread into the cast aluminum cleats. We cleaned up the 3 original slotted drive, flat head, countersunk machine screws from atop the cleat and reused them. I suggest using Tel-Gel anytime stainless fasteners are threaded into aluminum. Save for the three atop the cleat, we had no issues installing the new fasteners in the original holes.

We found a flexible 1/4" drive extension to be very helpful in removing and installing the nuts below decks.

When re-installing we used 3M 4000 to seal the holes under the track and butyl-tape for sealing between the fasteners and the track.

Good luck with the project. Hope you are able to free the fasteners from the mid-ship cleat without too much drama.
As a follow up to my answer to your queries, I checked the sail track while on Pilgrim this morning. 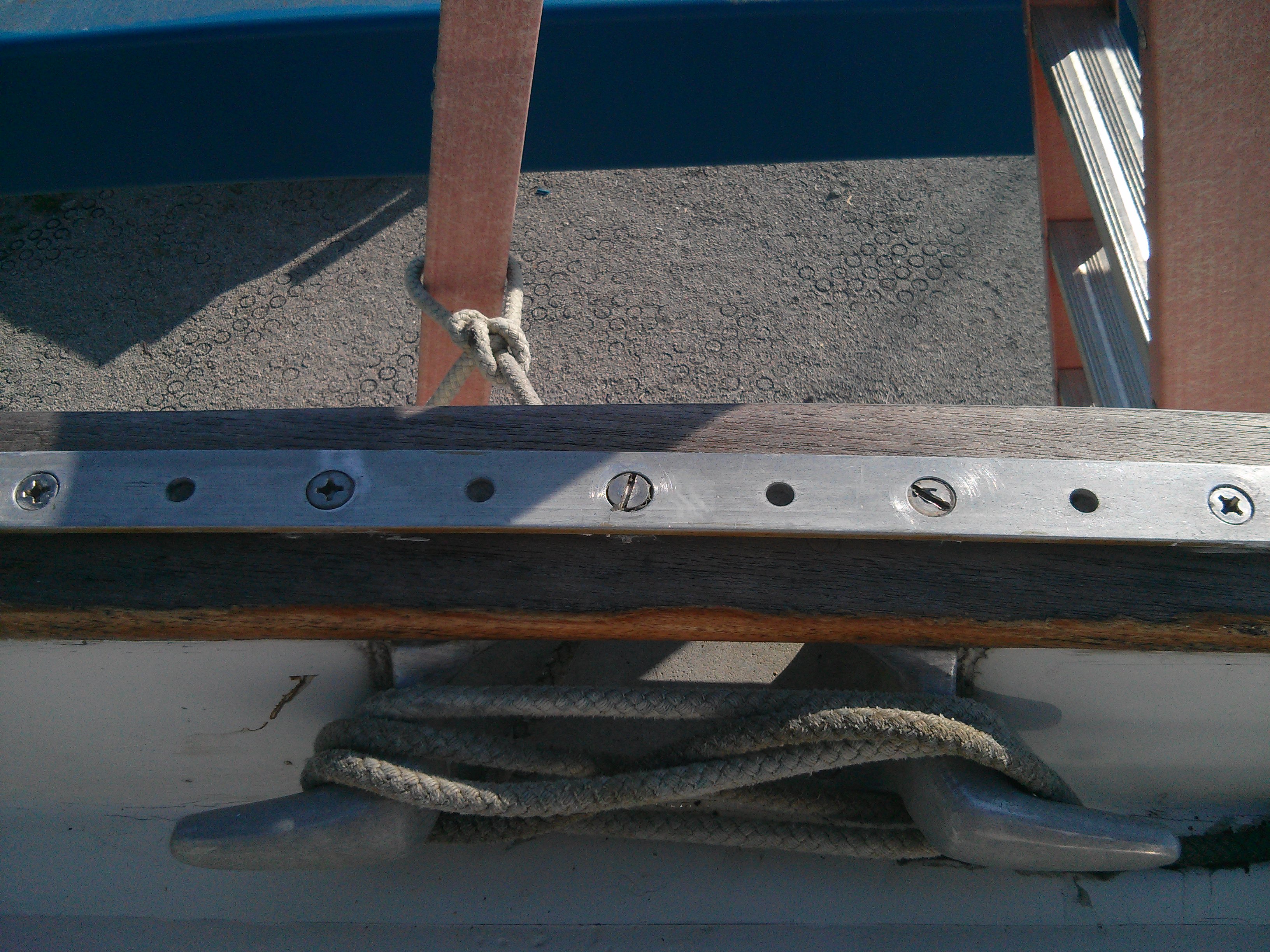 We purchased new 5/16" machine screws for re-installing the starboard track. The new screws did...
Only two of the fasteners for the track are screwed directly into the cast aluminum cleat. These are the two slotted screws in the image above. The forward of the two is in an hole that is open and visible from below. The aft fastener is in a blind hole
Don't know why image only posted as link. Attempted to re-post my comment got the same result.
Thanks for the details, Jeff! The impact driver did the trick on the bolts above the cleat...felt good to hit those suckers, too. This is a tough job!

We have the track out and now it's time to clean up the old sealant. Did you use your heat gut to help with old sealant removal? It seems there is a ridge of teak under our track. It's probably for track car clearance and perhaps keeping water away. Anyway, we are scraping away now.

Any tricks to putting the nuts back on? It was hard enough getting them off, I'm not excited about the reinstall! This job can't be done without the flexible extension, deep and normal 1/2" sockets, small socket wrenches and long handled ones, and I found a ratcheting, flexible, combo wrench to also be helpful.

I've been keeping a blog about this summer's adventures. It's not techie, and more for our non-sailing friends, but you can see my post about this project here https://rhea382.wordpress.com/2015/06/23/monday-june-22-2015/

Thanks for all your help, Jeff. We'll have our boat looking great and sailing strong very soon!

Good to hear you were able to remove the fasteners threaded into the cleats.

The best tools for removing old sealant are a combination of
Our track also rested on a slight ridge in the teak caprail. I could not decided of the ridge was intentional (allow cars to move freely or drain water away from track) or if it was a by product of multiple past sandings to refinish the teak with the track in place.

Re-installing the track when much faster and easier than the removal. The biggest issue was discovering the new machine screws did not match the treads in the mid-ship cleats. We started installing at the forward end and moved aft. We found an appropriately sized (9/16" I think) ratcheting box end wrench to be very helpful.

Why did you all feel the need to remove the track? We though it was the source of some of Pilgrim's leaks along the starboard hull / deck joint. It turns out that most of our leaks were from the failed seam under the outboard rub rail and from poorly installed bow pulpit & bow cleats. We did not, do not have plans to remove the port side track. It looks to be an even more onerous job than the starboard side.

Thanks for sharing a link to the blog. I looking forward to following along with your adventures. Have you seen our blog? M382Pilgrim@blogspot.com. We have links to photo albums of various re-fit projects both complete and underway. We too hope to move from a refit log to a travel log as we transition to living aboard Pilgrim.

Jeff
Thanks so much for the tips!

Our track was definitely leaking. We discovered the leaks while replacing our headliner and vinyl hull lining. It began to rain hard during the installation of the lining. Drips were coming directly from at least 5 bolts. The last thing I wanted were leaks behind the new headliner (creating new mold and mildew!).

After seeing that, we'll certainly take up the other track. But I'm going to wait until next spring (we only get to sail seven weeks out of the year now). The new headliner does not cover the bolts on the port side. If there are any leaks, they are behind the cabinetry or in the port lazarette.

Thanks for the link to your blog, Jeff. Lots of great info there!

I'll be finishing the clean-up this morning and hope to remount the track this afternoon.

Thank you again for all your help. I hope others find your tips useful in the future. I'd say 36 years is about as long as anyone can expect that sail track adhesive to last. Many folks might be doing this project soon.

Cheers,
Todd
Track remounted yesterday. Took three people, but only two people are required. One on deck and one below (preferably with small hands and fingers to get the nuts back on the bolts). Anyway, the install was a success and with no leaks. The new headliner went up today. What a difference! Thanks again for all your help and tips.